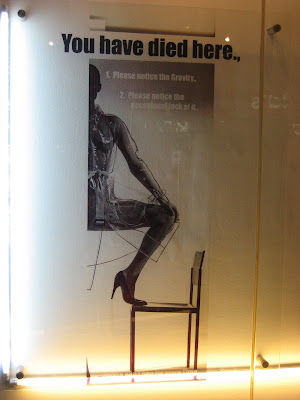 With the stench of the great New Critical corpse still hanging in the literary air, it has become almost an insult to brand anyone a formalist these days, what with the old formalism’s emphasis on the so-called closed nature of the literary ‘work’ (in opposition to Roland Barthes’ open literary ‘texts’) and debilitating delusions of organic unity—poetry’s arrogance of apparent completeness unto itself, denying any contextual relations to cultural and historical materiality.

But with the fresh air provided by “Mighty Big Headstand,” the first of a series of small-scale exhibits cum large installations of “visual and literary hybrids,” Cesare A.X. Syjuco doesn’t seem to give a damn what he’s branded anymore. And maturely so, for to extend his metaphor it isn’t merely the brave artist’s head at risk here: the verbo-visual headstand straddling different traditions at once is done also by the body-language of its viewers/readers, unwitting participants who themselves become personae in these 3D poetic texts, quite literally exploring a book bound by walls rather than paper or carton, themselves read as part of the show by more and more passersby.

By the gallery’s entrance one is greeted by the declaration, “You have resurrected here.,”—as if by coming to the show s/he has entered a new life, a new textual beginning—followed by the instructions “Please excuse the inconvenience., / Please don’t struggle., / Please do exactly as you’re told.,” forewarning the audience of more instructions and consequent participation, urging them into performance, penetrating the cold defenses of and disturbing armchair readership accustomed to being spoon-fed with bland and passive insight. 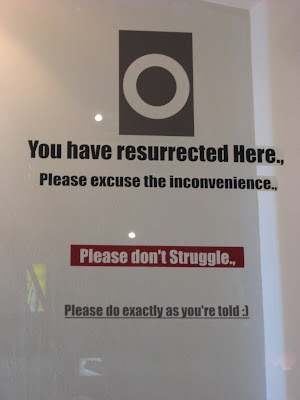 And certainly there is no passivity here. The show after all entails engagement, for to read Syjuco’s texts is to also view them, juxtaposing the abstraction of discursive language against the concrete experience of the image—a showcase of the creative potency of type+face when taken for more than mere tasteful design: typography at the service of signification, the medium becoming McLuhan’s message. But there is more happening here besides the simultaneity of the abstract and the concrete; there is also that of the gallery-book’s multiple pages, each not simply coming one after another as in the linear progression of traditionally paginated paper, but all pages at the same time. The use of transparent glass not only allows both sides of the page to be read and viewed at once, but allows the other pages—the walls behind the glass—easeful visibility from any single standpoint: imagine being able to read page 14 of a standard book while you’re still on page 8. One may also view one text then proceed to another, without any given order save for those formulated by chance or by the viewer.

Such is the experience beside the aforementioned warning, where below a hanging lightbulb in the creepy fashion of interrogation rooms runs tongue-in-cheek the centered text, “a shadow / is never blacker / than its shadow., // a hole in china / isn’t always / a mountain in peru.,” The second stanza is readable only from the backside—whereby to read the whole text best, one should move from one side of the glass to another. This maximization of transparency calls to mind Duchamp’s “Large Glass,” an equally playful though more heavily visual, more hermetic installation by the French artistic rebel, whose irreverence and blissful insurgency resembles Syjuco’s trademark irony and humor. 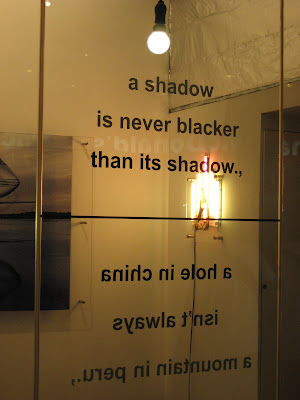 One should also note that the background constantly changes too. While a book’s layout is eternally static (that is, should one not count dust, and the deterioration and yellowing of paper with age), this poem’s isn’t—for the flurry of people behind it continually sets new contexts for the texts Syjuco provides.

And artistic texts they truly are rather than plain artistic works, for it underplays the overt suggestion of discursivity by ‘text’ to highlight the role of ‘texture.’ Both words after all come from the Latin ‘texeire’ which means ‘to weave,’ the focus more on material sensation than abstract meaning. This is best felt when before being informed of his/her resurrection, the viewer is told, “You have died here.,” followed by these eerie instructions: “1) Please notice the gravity., / 2) Please notice the occasional lack of it., / 3) Please don’t panic., / 4) Please don’t beg for more time.,” Texture plays with readability when the viewer arrives at the third instruction, its extremely light print-quality rendering it completely invisible if not stared at from a number of strained angles—almost as if it was intended to poke ironic fun at the confused reader, panicking in his/her inability to read “don’t panic.”

A form of reading, a reading of form

Tension between the verbal and the visual, the two-way penetrability of glass, death and shadows and resurrection—the motif of duality and reflection is made most palpable by twin wide and lighted panes depicting planes occupying two walls at a 90-degree angle within the gallery. Each airplane is faced with its doppelganger, both parked over their own reflections, printed in what seem to be Benday dots like those famously employed exaggeratedly in Lichtenstein’s popular comix-style art. But these dots aren’t so much culled from old comix but the cover boxes of more recent hobby toys, of plastic tanks and model planes waiting to be assembled by the enthusiastic hobbyist.

But the implications go beyond the banal surfaces of hobby. Above the left plane the text goes, “You are leaving here.,” and below, “Please notice the Air.,” Above the right plane the text goes in counterpoint, “You are arriving here.,” and below, “Please notice the Air.,” What is most interesting here isn’t the juxtaposition of arrival and departure as mirror-images of each other (made literal by the actual surface reflections of each other as effected by glass and light), but the two planes’ juxtaposition against a third wall, on which hangs a glass pane depicting the classic image of the Madonna and Child.

Where the classical meets the contemporary, the pane which is the Holy Infant’s makeshift 2D stable becomes the olden reflection of the plane’s pane, which is in turn is its makeshift 2D hangar. And while one plane is the other’s doppelganger just as arrival is departure’s mirror-image, could this possibly be making the implication that the Son is the Mother’s reverse double, consequently connoting the secularization of the once-divine and the sacred quality huge manufactured objects (especially military objects) like planes have come to acquire? The discourse jumpstarted by Syjuco is not simplistic but materially nuanced, denying any easy one-to-one correspondence among reflections: a shadow isn’t merely as dark as its shadow after all, and holes don’t automatically translate into mountains.

And yet even in isolation, the third pane is already in itself a complex marvel: backed by light whose five long bulbs seem like a hand giving both icon and audience the finger, the image’s classical roots in painting is complicated by its postmodern reproduction as print-out. The pinkish luminescence of the middle finger almost begs the viewer to pay attention to detail, to stoop in close examination of the imperfect inkjet quality of printing, lengthwise jags all over. This prompts the audience to re-examine the other imagistic texts, their occasionally unsmooth placement of acetate sheets over glass, emphasizing the seams over what seems plain and natural.

For like in his use of Benday dots in the planes, it is this confession of artificiality that constitutes Syjuco’s formalism, that all artistic products are merely products of their process: disillusioned by organic unity, one ceases to view any form as natural but rather as arbitrary constructs, shaped by the artist and further shaped by his audience. Far beyond mere utilization and manipulation of form, “Mighty Big Headstand” is a mighty big critique of form—and Syjuco accomplishes this like a true master, at once playful and with effortless grace. Who knew that with a few glass panes and print-outs, one could interrogate both poetry’s increasing abstraction in language and much of mainstream art’s own obsession with visuality?

By freeing language from the constraints of the page and introducing discursivity to the image, the show urges all to re-examine what we know of art and literature and the tools we have for examining them.