The recession has arrived at Galatea Resurrects (GR). Due to extensive travel in the past six months, I had to collapse two issues into one...and the "recession" in people's time for poetry reviews may be seen in how this two-in-one issue only generated 72 new reviews/engagements. Oh, wait -- 72 new poetry reviews/engagements! Actually, that isn't so bad, is it! Which is also to say, in its two-year existence, GR has presented 610 new reviews, covering 275 publishers in 15 countries!

I still remember starting GR hoping to reach as much as five reviews per issue through the generosities of whoever is out there paying attention in the internet. Well, thank you to GR's numerous, generous volunteer staff of reviewers. You make it fun to indulge in statistics -- such as moi running tally up to this current issue:

Of reviewed publications, the following were generated from review copies sent to GR:

I continue to encourage authors/publishers to send in your projects for potential review. Obviously, people are following up with your submissions! Information for submissions and available review copies HERE.

In this issue, I have the pleasure of offering reviews by students whose critical eyes were being trained by two poet-professors: Kristin Naca over at MacAlester College's English Department and Catherine Daly during an open assignment course in 1999 called "English 3xx: Reading Poetry" at Antioch LA. As then-student reviewer Wendy Owen says, "Catherine did something here that I thought was the best way to learn poetry -- reading and critiquing it, not pretending you might know something to impress the teacher but really getting into the head of the poet and finding the key to the poet’s intent yourself. I got to know lesser known poets, not over-exposed and perhaps over-considered ones. And I fell in love with some of them."

I'd like to make this offer to educators out there, to do as Kristin Naca did: have your students use some of Galatea Resurrects' review copies (list available HERE) for assigned poetry reviews. For those you deem worthy, feel free to submit them here for potential publication. (Of course, as with all review copies I send out, please return those review copies if your class ends up not doing a published review, so that I can continue to try placing them with future reviewers). While the review from Catherine Daly's class took place in 1999, the students of Kristin Naca availed themselves of GR's review copies.

One of Galatea Resurrects' special features is its openness to publishing more than one review of the same title -- in this issue, for example, three folks review Collin Kelley's chap AFTER THE POISON. But it's also interesting to see how one reviewer writes two different reviews of the same book, to wit, Patrick James Dunagan generously gives GR a review of Jack Micheline's ONE OF A KIND. But you also can see his different review of the same book, published in the SF Bay Guardian, at http://www.sfbg.com/entry.php?entry_id=6910#cmt. Enjoy!

As I've said before, your Editor is blind, so if there are typos/errors in the issue, just email Moi or put in the comments sections and I will swiftly correct said mistakes (since such is allowed by Blogger).

Last but not least, here are some photos for ye German Shepherd aficionados (but if you really want to understand this breed, you need to read poetry -- Woof!): Achilles and Gabriela wishing you all a Happy Holidays! 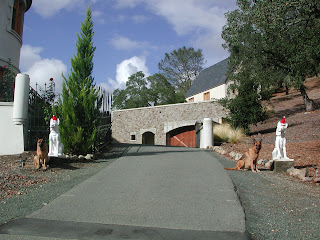 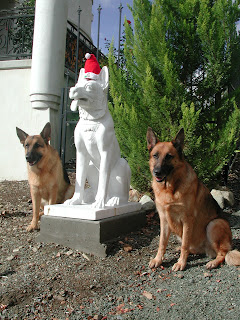