SO THAT EVEN by TAWRIN BAKER

So That Even by Tawrin Baker
(House Press, Bloomington, Buffalo, Philadlephia, and New York City, 2008) 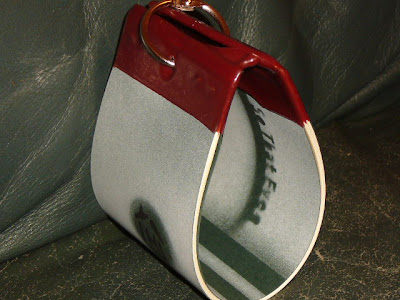 Tawrin Baker has built a book which presents unique problems to the would-be critic or bibliologist. One has to go gently around it with an insinuating eye and practice a rebellious tongue: there are no words known to name it, nor its parts, nor its imagined macrocosm, the library.

In fewer than a thousand words: Tawrin's creation is made of paper, crimson wax, and a clasping metal ring 1" in diameter. Instantly stunningly puzzling, the book is bound by the clasp which pierces and brings together the two far ends of a signature sealed on both ends by crimson wax bent around on itself into a donut-shape. If you pin the thing totally flat it looks more or less like a regular book, bound by a metal ring, but it does not work like a regular book, because it does not open. You can of course manipulate by prying apart the pages imprisoned in the ring's hermetic perimeter to see there is writing, but you can only see it, not read it.

The only script or glyph on the outer-surface is a house on its side, like it got shoved down in a schoolyard fight by some dexterous animosity. If we squeeze the book’s two pleasure points so it blossoms, we see its inner surfaces are tagged. "So That Even" reads one title; "A Lover Exists," the other, in mirror.

Perhaps if one is an engineer and a poet, one can figure out what to do with this unnamable thing which no combination of libro, biblio, sphere, hemi, semi, circa, roto, text, lexi, seems to fit (rotodislexitext? circabilbiosphere?). Naming half of the thing is equally challenging and necessary because the interested student cannot shake the notion each half is one of a pair. Two parts, which perhaps if they can be extricated from one another can be read.

What kind of society can there be for such a book? What kind of library could hold it? This is a lonely book, though it has each other.

I have held the thing up to my eye, articulated and mutilated the pages, and seen inside. Every other page is set to words and every other page offers a geometric figure of circle traversed by four gnomon-like hands, whose angles change page to page. As for the words, though reading is dizzying, I can at least look at them through my squinting hand, as I’d do any other unintelligible shape, and it's clear many if not all the sentences in the one medibook are repeated in the other, though not in the same order. And, on each written sheet I can make out two couplets -- like two lovers in bed.

Unfortunately, most things can’t be said about anything, much less something. Especially here where a riddle craftily mediates what can be known -- you can't say much at all. Yet, it's materially obvious this is a cohesive text. It's a book of interlacing every-other-pages that fits together so well it's an indivisible whole, physically. The writer is obviously a scientist of some kind. The advertised poetry within is most likely metalogical.

Eric Gelsinger is a member of House Press. Originally from Buffalo, he lives in Brooklyn and works near Times Square as an equities trader. More of his writing can be found at www.gelsingers.blogspot.com
Posted by EILEEN at 6:25 PM