A PORTRAIT OF THE ARTIST AS MORON

When conceptualist frontman Joseph Kosuth proposed art to be an analytic proposition—away from the prized pedestal of sight and toward the backroom of the mind—he was met with skepticism. After all, this entailed the dematerialization of the artwork, becoming pure concept incapable of being sold by commercial galleries. While decades have passed since this radical reformulation, and discourses regarding the nature of artistic activity continue to be produced (have in fact become artworks in themselves), the same skepticism cannot be avoided upon contact with the work of Costantino Zicarelli and Buen Calubayan.

Which may well be indeed one of the most salient points of Zicarelli’s [...] exhibit I’m with Stupid / I’m Not with Stupid and Calubayan’s [...] Idiot Show for Idiots. In a welcome respite from painting and teaching—and possibly in a gesture expressing disillusionment with both practices—each comes up with a separate affair that equally straddles both their previous practice of demonstrating visual dexterity (on canvas) and performative finesse (in the classroom where pedagogy is also a kind of performance, and elsewhere). With their material work taking the backseat in this artistic ride, language takes the wheel as these two set on a collision course with conceptual practice, rabidly running over pedestrian aesthetics in their way.

Home is where the art is

But skeptical in what manner? you might ask. Where Kosuth’s analytical conceptualism stops at a tautological questioning of what constitutes art objects as such, Zicarelli intervenes to reveal his skepticism of what constitutes reality per se, playfully reveling in the fallacy of visual and linguistic reference by locating his work in a broader social context. Playing up the role of context in approaching a work of art by refusing to house his project in a gallery, he resorts to turning his own literal house instead into both a gallery and the very project itself in simultaneity.

For an entire week on October, the Zicarelli household was open to the viewing public, each welcome within certain hours to look at everything inside, from sleeping quarters to appliances and the most commonplace of objects—so absurdly commonplace, in fact, that they become the spatial equivalent of experimental poet Gertrude Stein’s Tender Buttons, where words for household terms like Duchamp’s readymades are unshackled from their referential/functional context and brought into a poetry/art environment in a hyper-Formalist (whether intentionally or unintentionally is irrelevant) gesture of defamiliarization.

However, Zicarelli complicates the Duchampian conceit exactly by not taking his goods to a gallery for display. He simply labels each object with a title and declares their variable dimensions, consequently alluding with ease to the more-than-familiar art contexts viewers are deeply acquainted with. This, in turn, cleverly evokes not so much art’s reliance on social institutions but the arbitrariness of this reliance. 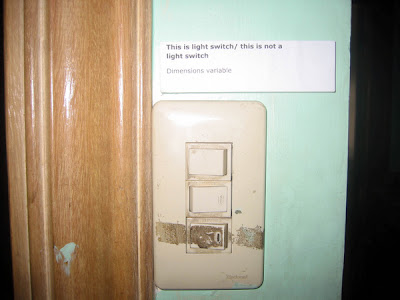 In turning the Zicarelli household into an art environment, I’m with Stupid / I’m Not with Stupid demystifies what is usually perceived as the neutral or passive role of the gallery or museum and points with acerbic humor (in the manner of ‘I’m with Stupid’ t-shirts) at the covert processes institutions manipulatively play a part in—if not outrightly instigate—in shaping aesthetic dogma and the standards with which ‘authorities’ measure a work’s quality of and art-ness.

It is by way of such subtlety that this Fil-Italian artist becomes graceful in his work, in spite of its political overtones. And to heighten this grace and subdue his politics—isn’t politics after all more potent when discreet?—he juxtaposes against it a sly refunctioning of ‘I’m with Stupid’ in classy-kitschy counterpoint. It’s a two-way extension Zicarelli commits herein: he first partners the affirmative statement with its negation (hence ‘I’m Not with Stupid’), only to drag these conjoined sentences and turn them into titular templates. In this fashion, a simple kitchen toaster is therefore labeled “This is a toaster / this is not a toaster,” a bedroom he shares with his brother is “This is Alessandro and Costantino’s bedroom / this is not Alessandro and Costantino’s bedroom,” and the stairway is—well, you get the picture.

The ‘grit’ in ‘Magritte’

Which is exactly it: whatever they do, audiences get only the picture and never the hand that makes it—flat in its concealment of real social occurrences. Ironically, this is achieved by Zicarelli without having to rely on constructed images, as in a painting or photograph, unlike Magritte who emphasized on his work’s pictorial quality. Allusion to the Belgian surrealist is inevitable, for it was his “The Treachery of Images” with its infamous depiction of a pipe and painted textual accompaniment “This is not a pipe” that jumpstarted an entire tradition of verbo-visual discourse about the complex nature of verbo-visual discourse itself.

But while Magritte only goes so far as calling attention to the simulacral character of pictures and representation (the pipe he depicts after all is, in its depiction, but an image of a pipe), Zicarelli takes the extra puff that reveals the smoke of simulation to cover up more than merely the picturality of pictures but the equal picturality of everything else. A toaster thus is not essentially a toaster, but a toaster only insofar as toasters have been socially constructed for us by the dominant classes: rectangular and electric, with double slots for dual slices of bread mysteriously analogous to the principle of binary oppositions most systems of thought are founded upon.

And there’s hardly any surprise when even the basic linguistic reality of grammar is subjected to this critique of arbitrariness. The keen observer will notice not just awkward nomenclature (e.g. “This is a DVD table / this is not a DVD table,” where the so-called DVD table is an ordinary desk on whose surface is a stack of pirated discs) but blatantly inconsistent syntactical patterns and ungrammatical moments as well (e.g. “This is light switch / this is not a light switch” [sic]), as if to bring to fore the artist’s problematic heritage. As a minoritarian cultural figure, his idiosyncratic utterance is always in danger of being rendered insignificant because incapable of proper signification—all under the hegemonic aegis of grammaticality, now unfortunately held sacred by the dominant Filipino academy.

Who knew that through sheer demystification, one could put the ‘grit’ back into ‘Magritte,’ recalling the latter’s earlier discourse into newfound utility for contemporary times? “One object suggests that there is another lurking behind it,” goes the Surrealist artist, and Zicarelli goes out of his way (while paradoxically staying home) to expose the objects that lurk behind the objects that lurk still behind other objects—systems of power that ironically loom large in spite of their concealment.

To stretch the previous metaphor of travel, the path to collision with concept takes a drastic turn toward the gallery after an insightful stopover at home. But Calubayan makes sure this road is a dead-end, recalling a 1969 exhibition by Robert Barry where “for the duration of the exhibition, the gallery will remain closed.” Quite literally on a similar note, Calubayan hangs by the entrance to CCP’s Bulwagang Amorsolo the assertion that his show is “inaccessible to viewers.” By doing such, he commits the verbo-conceptual pun of simultaneously Barry-ing and barring the audience from entering physical artistic premises—acts that at once look back to conceptualist tradition yet also celebrate the spirit of transgression. 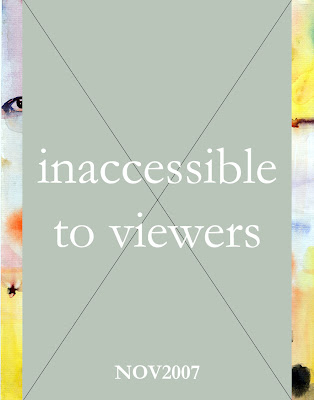 And what could be more renegade than transgressing an art model formulated by Marcel Duchamp, the prince of renegades himself? For moving beyond playing a trick on the viewer by closing down the gallery in the event of his exposition, Calubayan completely displaces the viewer in artistic practice, rendering the latter irrelevant—this in spite of Duchamp’s championing of the audience as co-creators in the completion of artistic work, as what his influential lecture “The Creative Act” indicates.

The nuances of Idiot Show for Idiots’ departure from Barry’s exhibit are critical: while the former’s strategy is personal in its rejection of the viewer, the other is spatial in its shutting down of the gallery. Additionally, this shutting down was but a one-time affair where the gallery’s closed-ness became the show itself; Calubayan’s exhibit on the other hand is serial, making use of multiple venues: the same concept is carried out in a mix of popular and unpopular locations that range from Big Sky Mind to the artist’s private studio Jelo Submarine, projected to even be brought to commercial sites like stores within malls. In this multiplicity, Idiot Show for Idiots is a kind of insistence, passing up the opportunity to relieve the audience of significance for the benefit of one specific show in favor of relieving them of significance for good.

And yet an alliance with Duchamp is strengthened by the specificity of viewership: while Calubayan could simply have opted to close down the gallery or completely bar everyone from experiencing the show, he instead chooses to single out the “viewer,” putting into question art’s common relegation to the realm of sight and visuality. What becomes of the feeler and of the listener, the smeller and the taster? In sly reversal, Calubayan arouses suspicion in the excluded audience (thereby involving them again), subtly exposing the hypocrisy involved in much of artistic practice and management. When even in the supposed age of multi- and intermedia, in a culture that professes to celebrate difference and plurality, monolithic structures and exclusionary meta-narratives are still very much in place—and one such structure begging to be subverted is the privileged position of the visual in art.

“I have forced myself to contradict myself in order to avoid conforming to my own taste,” declares Duchamp, and Calubayan treads the same path of paradox: in critiquing the exclusionary character of art systems, he himself has to commit the act of exclusion. Idiot Show for Idiots thus is both a subversion of and homage to the great French rebel—for there lies no better way to extol the virtues of artmaking than to boldly give it the finger.

With the deceptively simple yet multi-layered strategies employed by Zicarelli and Calubayan, one wonders if the two have made fools of their audiences. The narrow-minded traditionalist will probably say, “No, they have merely made fools of themselves,” and s/he is likely to be right—for in their critique of art systems they have in turn been co-opted into these very systems. And in doing so, without having to raise a pen or a brush, they have created portraits not only of the Filipino artist as a moron, but of the audience as well, of the critic and the aesthete—and most cynically, of themselves.


[Zicarelli’s I’m with Stupid / I’m Not with Stupid ran at his home in Quezon City from October 6 – 15, 2007. Calubayan’s Idiot Show for Idiots ran at the Bulwagang Amorsolo of the Cultural Center of the Philippines from November 29-December 31, 2007.]
Posted by EILEEN at 7:00 PM