THE POETICS OF INTERMEDIA: BEA CAMACHO'S EULOGY TO ART

In the recently concluded exhibition Conversion Factors at Mag:Net Katipunan, one expects a machine-like accuracy to Bea Camacho’s latest works—an almost mathematical attention to logic and calculability rather than the emotional excesses of artifice and design much of contemporary art continues to recover from. But by refusing to bracket out the latter in her involvement of family matters, the artist graciously fails to meet this expectation, and by doing so paradoxically exceeds expectation by her equal refusal to present merely the former.

A third space is paved thus—or ‘cleared’ perhaps is a better word, given the extensive whiteness of the show—where both extremes arrive at a negotiation. And this negotiation is achieved through thoughtful employment of language, where words are no mere titles to individual works but serve as a framing device for each—such that in spite of their apparently peripheral existence, in the near-complete bareness of the exhibition, the texts begin to take the foreground.

Or background, as it were, in a performance where on one of the gallery’s white walls the artist writes or documents, as its title matter-of-factly indicates, the objects in her room. Filled with text, the entire wall is then covered up with more paint, and all that’s left for viewers to see is the white, massive trace of erasure—a literal whitewash. A poignant sense of loss accompanies the glaring absence, made blinding in certain angles by the light that strikes it from the ceiling. 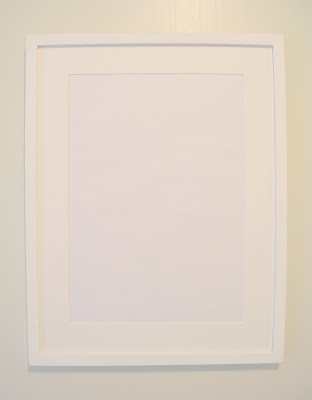 But what is more striking is that this feeling of loss, deftly manufactured by Camacho (and it is true that feelings can be manufactured, given the proper cultural tools), operates in two dimensions. With knowledge of the performance, one is made to think that the act of erasure attempts to communicate an emptiness felt by the performer—a notion that complements the show’s overarching motif of distance and alienation, attested to by the other works present. However, one is likelier to have no knowledge of the performance at all; walking blindly into the gallery on any given day, s/he is at a loss upon contact with the seemingly bare wall, empty if not for the lonesome titular label.

Seeing nothing, the viewer may ask: Has the work been stolen? And the question may appear in multiple allusive variations: Has it turned invisible, will it be telepathically conveyed, is it made of inert gas, is the work a secret, is it a readymade composed solely of found paint and wall, is it the emperor’s new artwork, is it another of those cerebrally chic conceptualist tricks? Each question is as silly as it is valid. For in an age where an empty page by poet Jose Garcia Villa mingles with an equally empty score by musician John Cage—and both have been buried beneath a tombstone labeled dubiously as that of the international ‘vanguardist canon’ (pardon the contradiction)—one begs for a point other than the Zen-like dictum “a canvas is never empty” formulated by Robert Rauschenberg.

And a plethora of points can certainly be read both into and from Conversion Factors, with its multiplicity of suggestions juxtaposed against bareness. While Rauschenberg’s saying rings true in his “Erased De Kooning Drawing” of 1953 where the renegade artist manually erases, frames, then displays a drawing by the Dutch abstract expressionist, in Camacho’s work it doesn’t. Or rather, it is rephrased, if not completely refunctioned, as such: it is the artwork instead that empties the canvas—in appearance at least, or more appropriately, disappearance.

For in the face of this effacement, the titles quite literally come into the picture, hinting at hidden social structures—at invisible form beneath invisible form—like a signifier that reveals rather than hides its arbitrary relationship with its signified, or a photograph that willingly declares its subject to be false, in betrayal of the realist cause. If one insists merely on the material presences (i.e. the exhibited objects) inside the gallery, then s/he will have to be content with the notion of “empty” canvases rather than emptied ones, missing out on the processes subsumed in exhibition.

This subsumption is rendered most keenly in Camacho’s “Portrait Series,” framed white sheets on which nothing is visible upon first encounter, save for reflected light and its counterpoint with shadow, with occasional dust. Each titled with a personal name presumably of a loved one, the seven portraits line the wall like blindfolded captives waiting to be shot—but in fact these subjects already have been, photographically so: executed mercilessly upon the finger’s release of the trigger at camerapoint.

But also like cattle for cheap, raunchy burgers—or Rauschenbergers, let’s say—they arrive ‘double-dead’ like decaying meat as final products for public consumption, with the subjects dying further by slowly turning invisible: the photographic portraits are photocopied, then the photocopies are photocopied, over and over, till not one trace of the images remains. The artist’s exhibited books attest to this: beginning with the initial photocopy of an original image, the subsequent pages unfold a tale of a person’s face diminishing, gradually and distortedly—conceptual memory retaining the ghost of someone’s identity, contrapuntal to visual memory struggling for recognition. 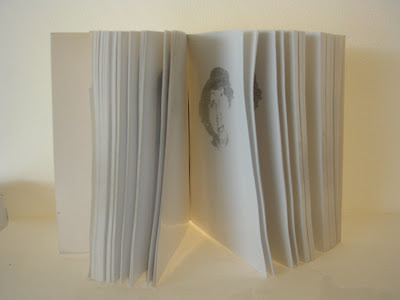 Because Rauschenberg’s erasure was committed by hand just as de Kooning’s drawing was made by hand, his work, rather than removing someone else’s signature or autographic gesture, superimposes instead his own signature upon another. Consequently, rather than doing away with the sense of individualism and authenticity the abstract impressionists were preoccupied with, Rauschenberg duplicates it instead with paradoxical sweep, with sweeps of the eraser. In Camacho’s portraits, however, the act has been committed mechanically instead of manually—impersonally—and the use of photocopying technology achieves a disturbing play on the so-called work of art in the age of mechanical reproduction.

Observe: while in Walter Benjamin’s seminal 1936 essay, the theorist proposes that the unique quality or “aura” traditionally accorded an artwork which renders it culturally sacred diminishes with every reproduction, Camacho seems to argue otherwise: In the fashion of most conceptualisms, it is the work that literally diminishes or dematerializes instead. But by virtue of the tender titles and the frames, the artist adds to this by implying that the aura is retained somehow in spite of this disappearance, that it remains intact—if not made more alive—by its relegation to the abstract realm of concept and memory. Presence, not absence, makes art grow into fodder.

This calls to mind another text-based work by Rauschenberg wherein he sends a typical telegram, empty if not for the heading, that declares simply, “This is a portrait of Iris Clert if I say so.” Though their difference lies in the fact that Camacho’s portraits are end-points of reproduction while Rauschenberg’s telegram is a starting point begging for reproduction, both take root in mechanical soil—the former in photography and the latter in type. The mixed-metaphor/oxymoron “mechanical soil” is intentional: these two works simultaneously celebrate their art’s paradox of personality and impersonality, for in the cold calculability of their processes lies the social reality of the artist as primary producer, whose personal affairs whether advertently or inadvertently inform—or shall we say fertilize?—his/her artistic produce.

To yearn is to yarn

The same paradox is explored further in two more works, and the preoccupation with process is maintained while coming surprisingly in the warm form of crochet. In “The Distance Between Me and My Brother,” yearning turns to yarn as time and travel become exactly what the entire show is about—conversion factors. Converting the spatial concept of distance into a temporal and emotional one, both viewer and artist ask: How long does it take to journey from one space to a distant other? The answer lies in how long it takes to produce this work—personal in its allusion to family and actual use of hands, recalling the stereotype of an old woman knitting a soft keepsake for her grandchild as she waits for the latter to come home from school. 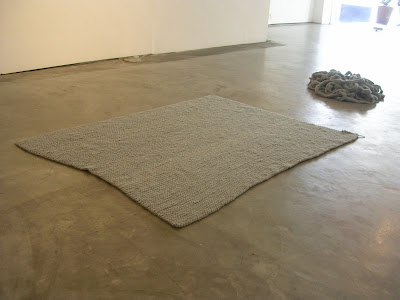 But not only does the mathematical notion of conversion confer on this work a sense of impersonality. So too do the grids of woven yarn produced in the process, invoking a kind of repetitive order that structures emotion, layer upon layer. This latticework also exists in “Ten-Minute Phone Call,” a crocheted work where time is converted back to material space and where the financial cost of a ten-minute phone call, presumably long-distance, is equivalent to the value of yarn used in its production.

Collectively, it is easy to dismiss Conversion Factors from a visual standpoint as just another recourse of emotional excess on its course to white catharsis, all in the name of art as an expression of emptiness. And a purely textual standpoint will prove just as dismissive, with the individual titles bordering on melodrama juxtaposed against the coolly detached show-title for a trite attempt at irony. But Camacho chooses to tread that narrow path between the pictorial and the literary instead, between the tangible and the conceptual, where materiality and textuality converge in the poetics of intermedia.

Given the somber quality and quiet equipoise of the artist’s oeuvre, one would think Conversion Factors to be an elegiac tribute to a dead beloved. But instead, it is art in its traditionally medium-specific renderings that is eulogized here, whose carcass lies still and still lies displayed in museums that are valuable the way mausoleums are.

[For more information on Bea Camacho and Conversion Factors, visit www.magnet.com.ph.]
Posted by EILEEN at 8:00 PM